I've been reading fic on and off for about half of my life (I started young) and I've occasionally tried my hand at writing but it wasn't until Community that I became fully absorbed in a fandom as an adult - this show, this fandom, is just spectacular.  I can't really accurately describe Community without writing an essay so I'll just do my best to introduce it and leave you to discover the rest - but I fully admit, I'm a co-mod over at a shipping comm so my fic picks are biased toward that end of the spectrum.  But trust me, the show itself?  It has something for everyone.  (Side note, my formatting is messed up, so I apologize if this looks strange or just...  Off.)

So what's Community about?  The simple answer is that it's a group of people attending a community college that end up in a study group together by happenstance (and some underhanded plotting) and eventually become, well, a community.  It's a comedy with elements of drama and romance and action.  As a television show, it parodies and explores tropes and cliches and it's intelligent and all too aware of its own medium.  For some, that's a turn-off.  For some, that's the draw.

Who are these people, this study group, you speak of?  The infamous Greendale Seven are a group of characters (literally and figuratively) like no other.  While they might have started as archetypes (and in some cases, stereotypes), they're so much more now.  Jeff Winger, ex-lawyer and egotistical jerk extraordinaire became a flawed man who's learning to change.  Abed Nadir, the friendless weirdo, found friends and is slowly learning to deal with all the complications those relationships bring.  Troy Barnes, popular jock, forgot about popularity and conventionality as he found someone who understood and accepted him.  Britta Perry, rebellious and unapologetic, let go and survives, nay, thrives as she opened up and founs her calling.  Shirley Bennett, divorced mother of three, expanded her horizons and grew into herself.  Annie Edison, neurotic over-achiever, grew up and found out what being an adult and being successful actually meant.  And Pierce Hawthorne?  Well, he's still kind of a giant jerk but we love him anyway. 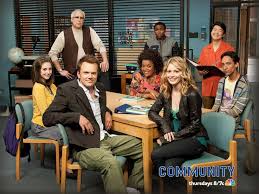 Compare them from season 1 to season 3. 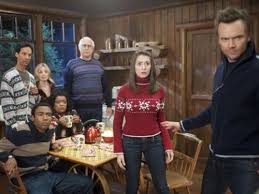 One of the great things about Community is that the peripheral characters are just as amazing as the study group the show centres around.  Ben Chang, from professor to student to security guard-come-despot, is a main character and honestly, he's sort of a frenetic character too.  But I think his presence is a necessity.  He often offers that special something that tempers the sweetness of a moment or alternately, provides a sympathetic figure in an otherwise harsh universe.  And sometimes, he's just pathetic but that's pretty much Chang for you.

The Dean, who became a main character in the third season, is a conundrum.  He's plays outside of conventional lines but he's generally such a positive means-well force that it's hard to dislike him even when his behaviour reads as inappropriate.  And his costumes are pretty epic.  Community is by no means for the faint of heart but that's kind of what makes it such a joy too.

There are more characters but really, I'll leave them for you to explore.  Community is so phenomenal (though it has ups and downs, like any show) that watching it the first time, relatively unspoiled, is something I wouldn't want to take away from anyone.  So below are my recs - while I don't think they spoil much for the fourth season, I would recommend being up to date through season three before reading just in case.
Fandom: Community
Pairing: Mostly Jeff/Annie, some Jeff/Britta, Troy/Britta, Abed/Annie
Spoilers: Up to season three, just in case.
Blurb:  I talked about the show above and briefly mentioned the fandom...

But I want to reiterate: Community, the fandom, the fans, the fanworks?  All of it is amazing.  This show has been in danger of being cancelled every season it's been on.  Most recently, there's been a lot of behind the scenes drama which has resulted in the original showrunner and one of the main cast members leaving.  Despite long hiatuses and severe delays, fans have held on.  They've organized campaigns and art shows and cons.  The actors, the writers, the people involved in the day-to-day delivery of the show are all invested because this is a show and fandom that encourages and supports that kind of investment.  I'm keeping most of my explanations and many of the wondrous details of the show brief because there's far too much to talk about and there's far too much fun in discovering it yourself (I can sincerely attest to this fact), so have at!

I tried really hard to include some variation in the pairings but I full admit, most of these skew toward Jeff/Annie.  I also tried to pick authors who readers might be less familiar with and stories that run the range of ratings.  These authors are good entry points for the fandom, though, and a few are multi-shippers whose stories and own picks reflect that.  If anyone wants more recs, feel free to ask - I think I have to come back and do this for the next Shipper Manifesto round, though.  Enjoy!
Fic Rec #1: show me the side streets in your life
Author:

cereal
Pairing: Jeff/Annie, Jeff/Britta
Link:</b> http://cereal.livejournal.com/148012.html
Rating/Warning(s): PG-13
Why This Must Be Read: Besides the talent of the author speaking for itself, this is a choose-your-own-adventure in the sense that the author takes great care during the first half of the story to explore how Jeff is attracted to both Britta and Annie.  The second half?  Well, depending on your preference, you get a choice.  As a shipper, I think it can be easy to forget or ignore the fact that Jeff had an attraction to both Britta and Annie - at one point, those attractions definitely co-existed.  It's interesting to see that explored, even lightly.

dollsome
Pairing: Troy/Britta
Link: http://archiveofourown.org/works/236402
Rating/Warning(s): PG
Why This Must Be Read: I think this was the first Troy/Britta fic I read and it sort of started me on that pairing.  Britta doesn't need anyone saving her but it's not a bad thing if you need a little help every once in a while.  And seriously, there was some tension during their dance scene in season one.  While there's some underlying Troy/Abed in the story, Troy and Britta and the group's reaction to their dance is the starring feature.

Fic Rec #3: Come On, Baby, Do You Do More Than Dance?
Author: NeoVenus22
Pairing: Jeff/Annie, brief mention of Jeff/Britta
Link: http://archiveofourown.org/works/177037
Rating/Warning(s): PG, mentions of sex.
Why This Must Be Read: I think one of the things I love about this is that, unlike on the show, there's a direct acknowledgement of the tension between Jeff and Annie.  It could have, technically, taken place in canon but it just barely contradicts canon.  Instead, it confronts the idea that feelings aren't logical and it makes both Jeff, Annie, and Britta out to be adults who are still finding their way.  The story really only concerns Jeff and Annie but there's no denial of Jeff's attraction or relationship with Britta.  I think it finds that sweet spot where you empathize with both Annie and Jeff.

Fic Rec #4: The Secret's in the Telling
Author:

_carly_
Pairing: Annie/Jeff, Shirley/Andre with background hints of Troy/Britta
Link: Part 1, Part 2, and Part 3
Rating/Warning(s): PG, maybe PG-13.
Why This Must Be Read:

_carly_ has a gift for writing comedic shenanigans that are so very in-character and this story is one of her earliest efforts that really sold me on that.  The relationships can be read (aside from Shirley/Andre) as being friendship-only but she does a wonderful job of creating that underlying sense of romantic tension.  The group is so very on-point here and whether you're new to Community or an avid fan, this is a good story to get a feel for the show and the fandom.

treblebeth is a great author, she convinces me that Abed and Annie could work as they do here though the story is very clearly headed toward Jeff/Annie.  All the characters seem so well-drawn here and it's really just a lovely 'what if' post-second season.

Fic Rec #6: no one goes to the video store anymore
Author:

fated_addiction
Pairing: Jeff/Annie
Link: http://fated-addiction.livejournal.com/692515.html
Rating/Warning(s): PG
Why This Must Be Read: If Community were just a tiny bit more of a drama than a comedy, this is exactly how I imagine it would go.  There are brief mentions of Jeff/Britta but this is a Jeff/Annie story and really digs into their dynamic in second season.  I can't really heap enough praise on it, to be honest.

fated_addiction's work is excellent, especially in the context of the Jeff/Annie pairing.

wordybee is pretty fantastic at writing these poetical stories full of flowing prose and that she can do in-character humour?  Added bonus!  It's also a really nice showcase of the friendship between Jeff and Britta, that uncomplicated ability to razz each other and rebound without injury.

veryspecial0ne
Pairing: Jeff/Annie, Troy/Annie, mentions of Vaughn/Annie
Link: http://veryspecial0ne.livejournal.com/2317.html
Rating/Warning(s): Ranges from G to R, and has about...  18 chapters.  It's not yet finished.
Why This Must Be Read: This is an epic story.  If you like Annie Edison, it's near impossible to ignore this fic.  It creates an utterly believable backstory and a incredibly detailed future.  Revolving around the many men that have loved Annie in some way throughout her life, the story is divided into (so far) 9 chapters with two parts to each chapter, focusing on a point in the past and then sometime in the "present" with the same character.  Although it's primarily a Jeff/Annie story, it doesn't shy away from Annie having other romances and what those relationships meant to her.  Really, don't let the length scare you - this story is enthralling.

nyclove3 does an excellent job in that and for two, it's nice to see something besides the usual canonical pairings.  If you like her work, I highly recommend At Least It Was Here (chapter fic, on-going, ranges from PG-R) and The Final Year (chapter fic, completed, ranges from PG-R + has an all-smut addendum!).

sinecure
Pairing: Jeff/Annie, ensemble
Link: http://shake-n-shiver.livejournal.com/79945.html (link to part four, other chapters linked there)
Rating/Warning(s): Ranges from G-R
Why This Must Be Read: I've really enjoyed

sinecure's work and when you want something short, potentially canonical, and something that reads as genuine, she's a great go-to.  I like these drabbles and ficlets because they feel like, as she describes them, missing moments on the show.  I would highly recommend you check out her other work available, much of which is smut, admittedly, and almost all of which is Jeff/Annie.
Tags: fandom: community, ship: annie edison/abed nadir, ship: annie edison/jeff winger, ship: annie edison/troy barnes, ship: britta perry/jeff winger, ship: britta perry/troy barnes, special: manifesto
Subscribe