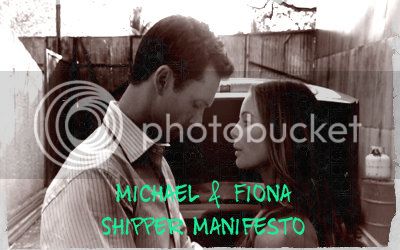 On the surface, these two characters were born to be OTP material. They’re hot! They take down bad guys! They like to blow shit up together! They have this long, complicated history that is full angst! They’re dysfunctionally functional! But it is also more than that. These are two people that truly, honestly love each other, and would do anything (and I do mean anything) for the other.

I was discussing with somebody a few weeks ago, right after Burn Notice had returned for the sixth season, the beauty of the Michael/Fiona relationship, and how rewarding it is, as a viewer, to see them in this totally different place after six years of fits and starts. They agreed, but not before they said something along the lines of yeah, Michael wasn’t really sure about her in the beginning of the series, but he seems to be sure now.

Of course, my first, immediately response to that was, well, no.

Michael and Fiona have been through a lot together – his demons, her demons, international conspiracies, Anson – and the only constant they’ve had for as long as they’ve known each other is the truth about how they’ve feel about one another. Fiona just happens to be more vocal about it, freely expressing her needs and wants and dedication to Michael, while Michael tends to play things close to the vest. That often gets misconstrued in the earlier seasons as indifference, but the more viewers came to know who Michael Westen truly is over the course of the series, the more they realize the truth: he’s always loved Fiona, he just didn’t know how to love Fiona. She’s chaos and unbridled passion, she literally gets off on violence, and is fully capable of being Michael’s undoing – if he allowed it, of course.

In that first season and a half, Michael doesn’t know how to love Fiona because he doesn’t want to know how. Fiona represents a life he can’t have as long as he works for the CIA, and it is important to remember that in that first season and half, his job at the CIA is all Michael lives and breathes. Everything he does is in an effort to find out who burned him so he can get his job back. He keeps his distance from Fi for a lot of reasons, but mostly, I think, because he knows it can never last, and leaving was hard enough to do the first time.

As the series progresses, Michael’s mission also progresses from getting his job back to taking down the organization that burned him. Both of these progressions are important to note. When we meet Michael in the pilot, he is a company man first, and everything else second. Most of the worth he’s ever known has been at the hands of the CIA. He simply doesn’t know anything else, and it is hard for him to let go of that, but he does, and every time he allows a piece of that go, he lets Fiona in inch by inch, until she his infiltrated every single crevice of his life.

Which isn’t to say Fiona is a saint and waited patiently until Michael figured his shit out. She’s not and she didn’t. She is quick with trigger. She acts first, asks questions later. Sometimes she pushes Michael too far, and sometimes she doesn’t push him far enough. In fact, she tried to move on, see other people, she even tried to leave Miami, but it’s all irrelevant because her place is by his side. These two work, though, because their first primal instinct is to do good, even if the means the use to get there aren’t exactly right, and they bring out that mutual characteristic in each other – which is why the work so damn well together. They’re different, but they’re also the same, and they know what is worth fighting for and what isn’t.

There is a scene in 5x18, The Last Stand where Michael has headed off on his suicide mission and Fiona is in the midst of helping get Jesse out alive, when she just realizes what she’s known all along: her place is by his side, for better or worse. She goes to him then, and is fully prepared to die along side him because that is where they belong – With each other. She’s always known it, of course, while it took Michael three seasons to admit it to himself, and five and half seasons to admit it aloud. But boy has it been a beautiful ride to get there. I mean, just look at these two:

Now, on to the recs. All of these receive the

abvj stamp of approval for being well-written and having excellent characterizations. There aren’t many good Michael/Fiona fics in existence, but these are a few of the best:

Excerpt: Without a doubt, Michael was the most frustrating man Fi had ever known. She'd been all over the world and had a lifetime of comparisons to draw on, but it didn't change a thing. A lesser woman would have killed him by now.

Excerpt: She was brazen and blunt and Michael was immediately attracted to her. She was younger than he was—maybe 20, though she never admitted anything—but she made him feel like such a child. Even at her age, she was a trusted member of the IRA. She knew more about bombs than he ever could. And there was a distance in her eyes that he wanted to erase; he wanted to catch her, to chase her down and keep her close.

Excerpt: "Can we talk about this later?" he asked. Sirens rose in the distance, a familiar and unwelcome wail. "When people aren't shooting at us?"

She smirked. "Never, then?"

Excerpt: Michael’s in Moscow and it’s cold enough to make Miami sound a bit less like hell and the airport’s closed down and snow lines the windows and the streets. The bad guys are doing what he wants, the good guys are staying the hell away, he’s had enough whiskey to make the night shimmer slightly and, as these things go, it could be worse.

It can always be worse.

It can also always be better.

Excerpt: It's possibly a little sadistic, how much Fiona's enjoying Michael's discomfort at spending Christmas with her family. Between the usual holiday spats, the shrieking of at least five or six of Fiona's nieces and nephews, and the threatening glares her brothers kept throwing at the man who's sleeping with their "baby sister"... The last part doesn't concern Michael for his own sake, Fiona knows, but he did seem to think it would be a bad idea to injure any of Fiona's relatives, which Fiona thinks a pity - it would be fun to watch.

Excerpt: The first time Michael met Fiona wasn't exactly the first time they met. Mostly because he was Maxwell Corrigan III, heir to a fortune in oil and some hereditary grudges that could only be healed by superior firepower, and she was Angelique, demure assistant to a crazed Quebecian ("Ah ah, Quebecois, M'sieu Corrigan") gun-runner.

It was a match manufactured carefully over several months in a dark, cramped agency office nowhere near heaven.

Excerpt:
"We're meeting him at a restaurant at the Riordan-Wainwright downtown, so I think your Glock would make just the right statement."

"And if this were a meeting in a deserted warehouse, what would you recommend?" he asked as he pulled out the gun and quickly checked it over.

She rose up on her toes, pulling her hem a few precious inches higher. Not that he noticed. "A Remington 870. Pump-action."

He hooked his gun in his white pants and tugged his suit jacket back down. As he locked up and they walked down the stairs, hethought up the most bizarre situations he could, but she had an answer for everything. When he finally drew a blank, Fiona let out a laugh. "Face it, Michael, I'm like the Miss Manners of firearms."

He was in front of her, and he stopped so abruptly that she almost bumped in to him, catching herself with a hand on his waist. "Miss Manners?" he asked, looking back at her over his shoulder as the sun lit up her eyes.

"My mother once had these plans to turn me into a proper lady." Then she took her hand away.

Fic Rec #8: Not in Your Hands
Author:

Excerpt: If there’s one thing a spy doesn’t want during a delicate operation that’s taken months of set up and is about to pay off, it’s a ghost from the past walking into the room like a bomb you don’t have the time to diffuse. There is a code, if you can call it that, sort of an honor among thieves, but it only goes so far and even then only if the other thief isn’t after what you want.

Or, in some cases, if they don’t see what you want and change their mind to go after it, just for fun.

Excerpt: She broke. She twisted her body around, turned her face into his chest, and cried and gasped into his bare skin. He held her, silent still, not wanting to give her words that would force her to remember this moment of weakness. Her shame and her guilt tangled in her stomach until she thought she would be sick. She wished she could be sick over what had happened. The wreckage their lives had made of the lives of innocent people surrounding them. Had she ever been as innocent as those men today, as trusting, as undeserving of death as they were?

Fic Rec #10: Nobody Does it Better
Author:

Excerpt: When Fiona smiled after that last fight and said "one more for the road, Michael?" I thought she meant sex. I meant sex. We always meant sex. Every fight, every celebration, Fiona and I ended them all with sex. Usually began them that way, too. So I said yes, then headed for the shower to wash off the blood and grime from the last forty-eight hours. Only half of it came from the fight I'd been in before coming back to the hotel we were calling home this week. The rest was all Fiona.