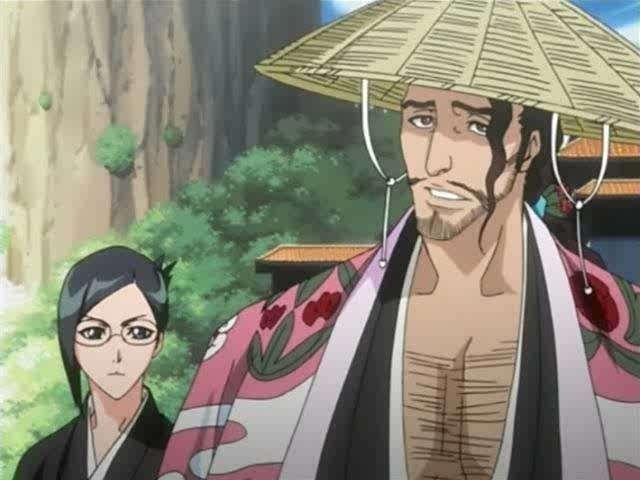 I can’t credit Ise Nanao and Kyouraku Shunsui with bringing me into fanfiction or turning me into the crazed shipper fangirl I am today (that honor belongs to Harry Potter and the Draco/Hermione pairing). They did, however, turn me from a longtime fanfiction reader to a fanfiction writer. And while they were not my first OTP, they have become one of my most beloved and enduring pairs. I will always ship them.

So, who are they? Kyouraku Shunsui is the captain of the Eighth Division of the Gotei 13, an organization of shinigami (death gods), tasked with helping human souls cross over to the other side. Ise Nanao is his lieutenant. 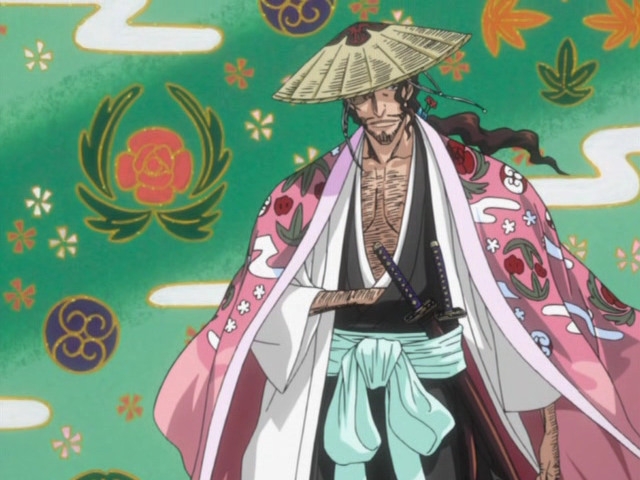 Unfortunately, we know more about Shunsui than we do about Nanao. Shunsui is one of the oldest captains in the Gotei 13 as well as one of the most powerful. He comes from a noble family. Nanao was a child when she entered his division, bright and talented. Shunsui is notoriously lazy, always napping, constantly drunk, and prone to flirting with every woman in sight, especially his second-in-command. Nanao is straight-laced and proper, ruthlessly efficient with paperwork, and forever exasperated with her captain’s advances. It’s a classic case of opposites attract. 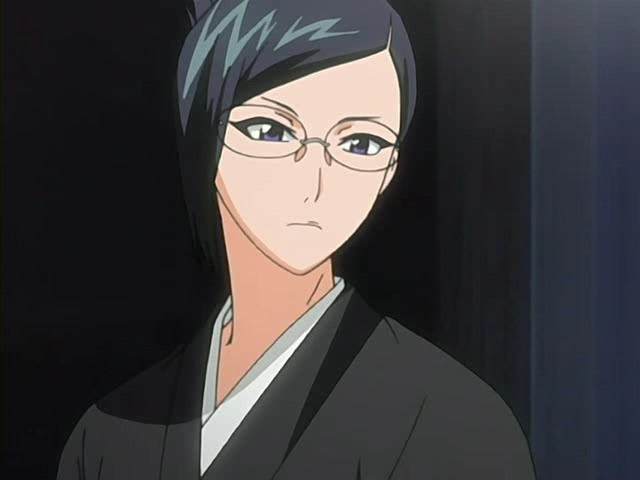 Or is it? Because when we dig just a little deeper, it becomes clear that there’s more to these two. Shunsui’s not your everyday bum or Lothario. He’s deeply serious and thoughtful, quick to assess dire situations and come up with an appropriate response. His laziness to fight masks a staunch pacifist. He only fights when there’s no other alternative, and he hates killing. When he fights, he’s a shrewd tactician and strategist. He’s a study in contradictions – he seems like a feckless fool, but then the mask slips and you see the sleeping dragon within. Nanao is so lovely as his foil – so straight-laced, keeping the division running and her captain in check. 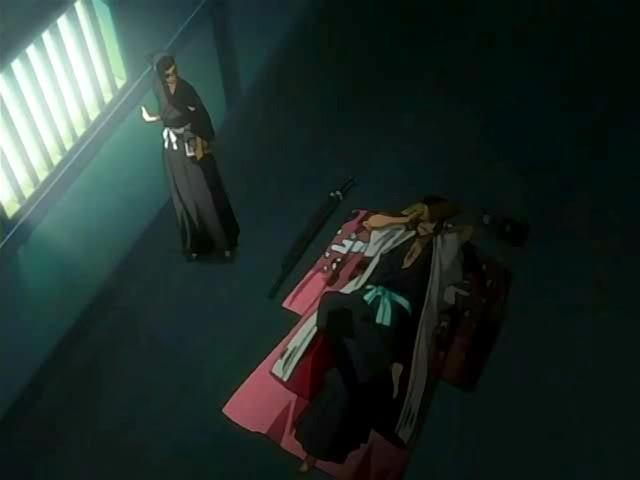 It wouldn’t be very difficult to conclude that Nanao would resent her captain for his ways. She certainly heaps enough abuse on him – stopping his flirtatious advances with a well-timed slap to the face with her handy giant book or a hidden fan, or memorably, dumping an entire basket of flower petals on his head, ruining a grand entrance. But Nanao is fiercely loyal to Shunsui. She’s almost always at his side, willing to follow him in whatever he does. She even aided him in defying his mentor, Captain-Commander Yamamoto, the most powerful shinigami in the Gotei 13. She did this to her peril, almost collapsing beneath the force of his power until Shunsui carried her away to safety. 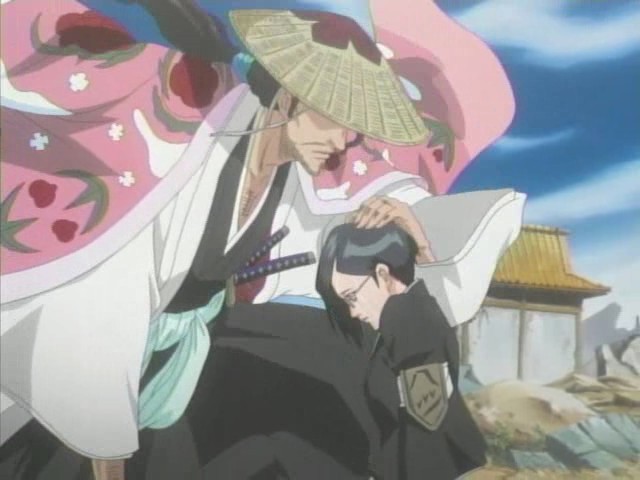 That was the event that made my inner shipper light up. Up until that point, all you ever saw was the lazy captain and his utterly capable second-in-command. In the span of a few moments, we were treated to Nanao’s unswerving loyalty and desire to protect her captain, even against the most overwhelming odds. We saw Shunsui’s devotion to her, spiriting her away in the blink of an eye. We saw a partnership at its very best. That’s what Shunsui and Nanao are – partners. It’s more than balancing each other out. It’s the fact that there are hidden depths to the other that they understand and appreciate. They can let down those walls when they’re together.

Because you don’t see very much of either character (both are fairly peripheral characters), there’s so much to play with in fanfiction, and Shunsui/Nanao authors have certainly run with it! The comic element of Shunsui and Nanao’s relationship is a common element and always fun to read. The angst potential is also quite high between these two, considering the hazards of their jobs and the general darkness of the Bleach storyline. On to the recs!

Why This Must Be Read: This is THE Shunsui/Nanao story. DarthAmmonite has a way with words that will have you screaming with laughter every five lines or so. The story finds them both contemplating the aftermath of Shunsui's fight against Captain-Commander Yamamoto and questioning the future direction of their relationship. Shunsui decides that he simply cannot be without his Nanao-chan and that results in a literal chase across Soul Society. Both characters are spot-on and the chemistry could ignite a forest. This is the fic that coined the phrase "Zaraki'd."

Why This Must Be Read: Every Shunsui/Nanao story she writes is brilliant. This, however, is my absolute favorite. It's slightly angsty, with Nanao contemplating her seemingly hopeless love for her skirt-chasing boss. Frustated and miserable, she anonymously wishes for a kiss from him. Let's just say that the granting of the kiss will blow your mind!

Fic Rec #3: A Test of Affection

Why This Must Be Read: This story gives us an early glimpse into Shunsui and Nanao's relationship, when she's only newly appointed as his lieutenant. They're delightfully off-balance at first, but as they go through this first mission together, you can see the strong foundation of trust being built brick by brick. The sequel, Tossed Aside, is equally fantastic.

Why This Must Be Read: Speculation abounds in Soul Society that the high level of power shared between the captains and their lieutenants renders them sexually impotent. The captains and lieutenants accept the challenge. This is such a fun, sexy romp, though there are definite serious undercurrents as well as villains take advantage of the captains'...preoccupation. Shunsui and Nanao are not the only couple portrayed here, but they are one of the central couples. And the smut? SO, SO HOT.

Why This Must Be Read: I'd forgotten how much I loved this format. Each little truth is a lovely, lovely insight into Shunsui and Nanao's feelings for one another. It does a wonderful job of showing the softer emotions they display towards one another, which are easy to overlook in light of Shunsui's flamboyant nature.

Why This Must Be Read: I'm such a sucker for a well-written AU. It's such a challenge to transfer them to another time and place and yet keep them fundamentally the same. In this story, many of our beloved Bleach characters are gods. Nanao is the moon, pining over a humble fisherman (Shunsui) who tries to catch her reflection on the water. Gorgeous.

Fic Rec #7: Ask Me No Questions and I’ll Tell You No Lies

Why This Must Be Read: This story goes in the complete opposite direction from the one above. Shunsui is a psychologist and Nanao is his patient. The slow unravelling of her traumatic secret and her subsequent recovery are fraught with tension and so fantastically written. This story just wrings all of the emotion out of you, and the ending is hauntingly bittersweet.

Why This Must Be Read: After the events of the Winter War, Nanao questions her place at her captain's side both professioally and romantically after the reappearance of his former lieutenant and her formal idol, Lisa. Shunsui takes great pains to reassure her that she's first and foremost, in every way that matters.

Why This Must Be Read: Fifty sentences on Shunsui and Nanao together. I'm such a sucker brief little glimpses into their lives together and their feelings for one another.

Why This Must Be Read: Nanao contemplates her captain's predilection for women and wonders about her place in his life - especially once she gives into his charms (as she eventually must). I must admit that I love stories like this...something about Nanao's angsty musings really strike a chord deep inside.

Mods, may I please have a tag for this pairing?